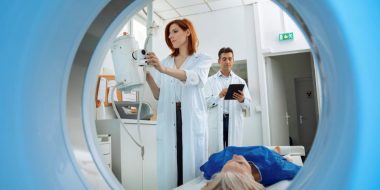 One prominent Chicago pediatric hospital is launching an “Abandon the Shield” campaign to begin moving away from using lead protection for patients during imaging exams this spring. Another a few miles away is mulling the same, despite the initial “shock” clinicians felt when presented with the idea.

Across the country, this movement away from shielding is beginning to take hold, Kaiser Health News detailed in a prominent report issued Jan. 15, and also published in the New York Times. At least a dozen U.S. hospitals have already changed their policies on protection during x-rays and many more are starting to have the conversation, one expert told the news outlet.

Doing so, however, has not always proven easy, with most healthcare consumers convinced that shielding is necessary during any imaging test.

“There’s this big psychological component, not only with patients but with staff,” said Rebecca Marsh, a medical physicist at the University of Colorado Anschutz Medical Campus in Aurora, Colorado, who spoke about this topic at RSNA’s annual meeting in December. “How do you approach something that is so deeply ingrained in the minds of the healthcare community and the minds of patients?”

Several national occurrences are fueling this “sweeping shift,” the report noted, including an April recommendation from the American Association of Physicists in Medicine, and final rule coming from the FDA in September that would remove shielding from the federal code. The National Council on Radiation Protection and Measurements is also expected to release a statement supporting an end to shielding in 2020, and groups in Canada and Australia have endorsed the switch.

At the local level, hospitals are grappling with state regulations that run contrary to this movement, KHN reported. As of last year, 46 states required shielding of reproductive organs if they are near the area targeted, unless it would interfere with image quality.

States are beginning to explore revising their laws, and some hospitals, in the meantime, are applying for waivers or sidestepping the requirement, KHN reported.

Read more about this trend in Kaiser Health News.

No Shield From X-Rays: How Science Is Rethinking Lead Aprons